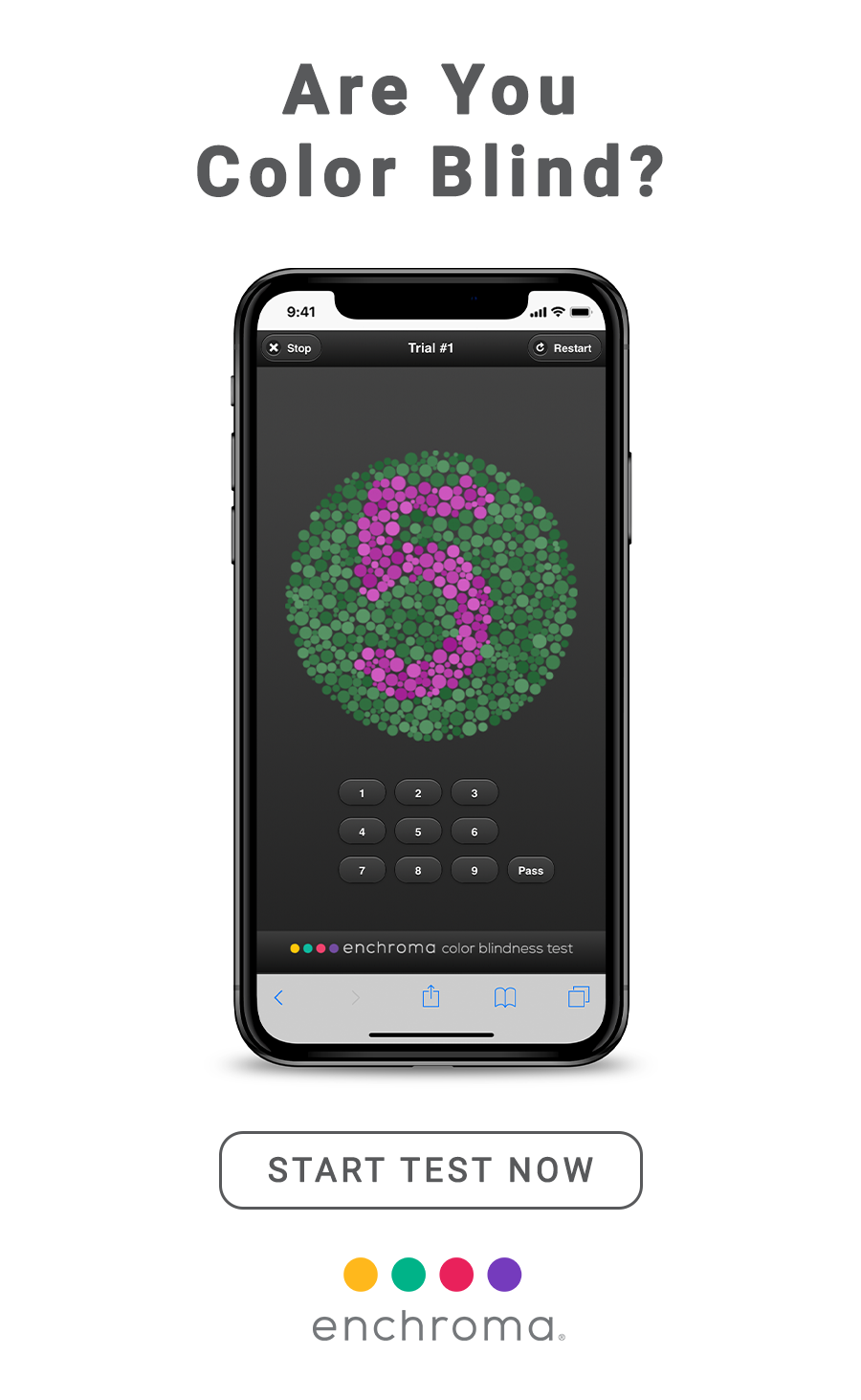 Please Contact Us for an appointment to see what glasses will help you the most! 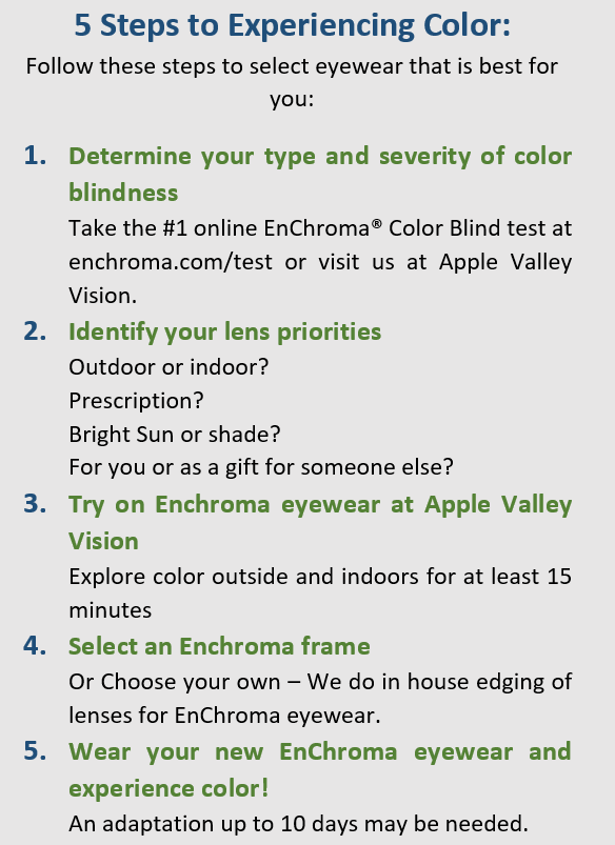 Color blindness (colour blindness), also called color vision deficiency (CVD), encompasses a range of causes and conditions and is actually quite complex. Usually when people talk about color blindness, they are referring to the most common forms of red-green color blindness, which are genetic conditions, inherited by men and women, caused by a recessive gene on the X-chromosome.

There are three photoreceptors in the human retina sensitive to colors whose chemical reaction and then electrical signal become interpreted as colors. The three cones are named as the S, M and L cones because they are sensitive to the short (S), medium (M) and long (L) wavelengths that are visible to the human eye. These cones are often named blue, green and red cones because they roughly correlate to blue, green and red wavelengths.

Red-green color blindness can be broken down into two main types: Protan (“pro-tan”), which is an anomaly of the “L” cones, mainly responsible for seeing red colors. And Deutan (“do-tan”), which is an anomaly of the “M” cone type mainly responsible for seeing green colors. This anomaly has quite a range, from just a mild change or shift in red or green sensitivity called Protanomaly or Deuteranomaly, to the complete absence of one of the cone photopigments, called Protanopia or Deuteranopia.

There are also other kinds of color blindness. For example, blue-yellow color blindness, called Tritanomaly/Tritanopia, and conditions called achromatopsia and monochromacy. Depending on the condition, some can be acquired genetically or can be acquired later in life the result of disease, trauma or even from some drugs. If you are unsure about what type of color vision deficiency you have, a complete diagnosis can be performed by a qualified optometrist, ophthalmologist, or color vision scientist using special tests.

For comparison, people with typical color vision can see about 1 to 7 million distinct colors. Those with color blindness see only about 10% of those colors.

Protans, people with Protanomaly, have a type of red-green color blindness in which the red cones are not absent but do not detect enough red and are too sensitive to greens, yellows, and oranges. As a result, greens, yellows, oranges, reds, and browns may appear similar, especially in low light. Red and black might be hard to tell apart, especially when red text is against a black background.

Deutans, people with Deuteranomaly, have a type of red-green color blindness in which green cones are not absent but do not detect enough green and are too sensitive to yellows, oranges, and reds. As a result, greens, yellows, oranges, reds, and browns may appear similar, especially in low light. It can also be difficult to tell the difference between blues and purples, or pinks and grays. Deutans usually respond positively to EnChroma glasses.

Tritanomaly, causing reduced blue sensitivity and Tritanopia, resulting in no blue sensitivity, can be inherited or acquired; the inherited form is a rare autosomal recessive condition. More commonly, tritanomaly is acquired later in life due to age-related or environmental factors. Cataracts, glaucoma and age related macular degeneration could cause someone to test as a Tritan. People with tritanomaly have reduced sensitivity in their blue “S” cone cells, which can cause confusion between blue versus green and red from purple. If you believe you have tritanomaly, we recommend you consult with an eye care professional for a complete vision assessment.

Rod-Monochromacy, S-cone Monochromacy and Achromatopsia are vision deficiencies that include partial or complete color blindness. If you have one of these conditions, we recommend consulting with a low vision specialist for a complete vision assessment.

Our EnChroma Color Blind Test is specifically designed to determine your type of red-green color blindness (deutan or protan) and level, whether mild deutan or protan, moderate deutan or protan, or strong deutan or protan. The color vision test is not a substitute for a complete eye exam. However, the test is fast, reliable and can provide valuable information on whether or not EnChroma lenses are right for you.

“Apple Valley Vision has been the best eye care office I could ask for. Dr. Rowley is always looking for ways to help his patients with better eye care. ”